We honestly can’t explain the pure badassery’ of the harmonica except to assert that there is voodoo-magic involved. When the blues are at play, this heady, hypnotic instrument can take possession of your entire being. In fact, we bet you can’t make it to the end of our list before you feel drunk off southern brandy from these hot sun incarnate melodies.

Not wishing to offend any demons or deities which may inhabit the harmonica, we’ve dedicated our time to compiling a list of songs truly worthy of its howling beauty. Not wanting to leave anyone out of the learning, we’ve been sure to include songs suitable for a variety of experience levels.

Beginners need no longer waste their time learning cheesy kindergarten songs like “Mary Had A Little Lamb” or “When The Saints Go Marching In.” Instead, you can learn the ropes with simple riffs from cool cats such as Bob Dylan, Black Sabbath and John Lee Hooker.

If you’ve got the basics of harmonica down and are ready for something a bit more challenging, we recommend giving The Doors, Sonny Boy Williamson and Muddy Waters a whirl.

For those ready to really rock, we salute you. If you can do justice to the wild mastery of The J. Geils Band, Led Zeppelin or Little Walter, then surely you will have achieved a true merging of souls with your comb.

Heavily marketed and manufactured pop bands are always a sore spot for us. It’s almost impossible to find musical recommendations minus the stock bands, and we pride ourselves on delving a little deeper than the “Billboard Top 20.”

Okay, so this band was probably created by M16 to brainwash the population and Paul McCartney was almost certainly replaced by a lookalike when he died in a motorcycle accident. But… it’s the Beatles! M16 did a really good job — it’s impossible to be mad at them.

We couldn’t bear to leave these lovable Liverpudlian’s off our list, so, here they are sneaking in at #12 with “Love Me Do.” It’s a campfire classic that will have everyone singing along. Best of all, just about anyone can pull off the simple harmonica riff while still sounding impressive. If you’ve lied and told someone you can totally play harmonica when you totally cannot, we’re confident that you’ll master “Love Me Do” before anyone has the chance to expose you.

Learn This Song: How To Play “Love Me Do” on Harmonica

Featuring the first of many howling blues harmonica solos on our list, “My Babe” is a sure-fire jam from Louisiana harp virtuoso Little Walter. Considered one of the greatest blues harp players of all time, a wild child and a revolutionary, Walter pioneered the use of electronic distortion and thus altered the course of music history (and not just for harmonica, either).

“My Babe” is Walter’s most iconic song and an excellent addition to our list of harmonica songs worth learning. Treat yourself. This is the perfect tune for capable harmonicists looking to up their game and experienced harp players looking to expand their repertoire into groovier territories.

Originally by Bo Diddley, this angsty plea is catchy as hell and it’s easy to see why so many bands have covered it over the years. A favorite of roadside bar jukeboxes, Muddy Water’s version of “Baby Please Don’t Go” is a harmonica-heavy blues classic with a whole lotta soul.

If you can learn to play “Baby Please Don’t Go” then, like all the other bands before you, you’ll be able to bluff a visage of grungy depth without having to experience any suffering in your own life. Mastering the basic riff is easy but you will have to do some work in order to nail the solos. They are quite awesome.

It would be criminal to curate a list of the coolest harmonica tunes without adding in a few by John Lee Hooker (you’ll also find ‘Boogie Chillin’ at #3). His hypnotic Mississippi blues may not have been so exploited by popular culture as Muddy Waters or Led Zeppelin, but “Boom Boom” is a classic most people will have boogied to at some point in their lives. Cult 90’s film “The Blues Brothers” made sure of that.

It’s not the easiest song to pull off on harmonica. You’ll need some chops, a sturdy foundation of practice. But we’ll consider your rendition a success if you can play it without coming across as a serial killer. We’re sorry to say that your teacher in the lesson below did not consider this as his goal.

Once upon a time, before Ozzy Osbourne gained fame as an MTV reality star, he was the lead singer of a little band called Black Sabbath.”The Wizard” is the second song from their self-titled debut studio album which, as is often the case, was arguably their most iconic. It is widely regarded as the first doom/heavy metal album, and so we might safely say that “The Wizard” featured the first-ever doom/heavy metal harmonica riff (played by Ozzy himself).

One of our preferred rumors posits that this song about a chipper wizard, wandering around and spreading joy with his magic, was written about the band’s drug dealer.

Luckily for learners, Ozzy was far too busy with his wizard’s magic to learn the harmonica very well. This riff was designed to be easily played, no matter how poor (or “magically influenced”) your coordination may be, without losing an ounce of attitude.

Learn This Song: How to play “The Wizard” By Black Sabbath on harmonica

Originally by Sonny Boy Williams (who you’ll find at #4), “Bring It On Home” is heavy chilling. As the harp intro groans, you can feel yourself sinking deep into your rocking chair on a hot southern afternoon, pipe smoke curling. Then that classic Zepplin guitar hits and all of a sudden you’re water skiing on crocodiles.

The harmonica intro is quite technically difficult in its subtleties. We recommend it for the well experienced. Chilling so hard is an art, after all. For a similar level of difficulty and harp playin’ badassery,’ you can also check out Led Zeppelin’s “When The Levee Breaks.”

He’s the inspiration behind many a vagabond taking up the art of railcar hopping, and many a harmonicist’s scruffy tootin.’ It’s Bob freakin’ Dylan. Critics may say he can’t sing for scratch but they are simply revealing the shortcomings of their own musical ear. His words, his lifestyle, his philosophy, his grounded-in-the-dirt energy holds a circle for the most authentic moments and strata of our life to gratefully and grungily relate. If you ignore all his later stuff after they killed and replaced him and his clone became suuuuper lame, anyway.

“Don’t Think Twice, It’s Alright” is an anthem for those who are sublimely cool and recklessly detached… and want to say screw you to someone they’d been heating up with before realizing how much they sucked. In the most humble and enlightened way possible, of course.

So centered in his own being, was Bob, that he flowed purely with circumstance. Like Patrick McGuhan’s Dangerman. Playing this song, you’ll experience the sublime sensation of being almost entirely sure you’re cooler and deeper than everyone else in the universe. If only for a moment.

Oh yeah, and it’s beginner-friendly, so all you 14-year-old band nerds can smoke your first cigarette and pretend you’re a man of the road.

We just talked about how cool Dylan is for a long time and diverged into abstraction before ending in questionable sarcasm? So, we won’t bore you with any more.

All you need to know is that “She Belongs To Me” is a truly remarkable piece of poetry. The Alfons Mucha painting of the music world, Riga’s Art Nouveau district in melody.

Learn This Song: She Belongs to Me by Bob Dylan – Harp Tabs

4. Keep It to Yourself — Sonny Boy Williamson

Sonny Boy Williamson was one of the greatest blues harmonica soloists of all time. He taught Muddy Waters everything he knew and one Aleck “Rice” Miller even attempted to pirate his career by stealing his identity.

“Keep It To Yourself” might not exactly vibe with today’s PC culture and we won’t attempt to justify its creepy lyrical tone, however, we propose that the musical content of this song is worth remembering and certainly worth learning. We recommend it to those who are already familiar with the basics of harmonica. The staple riff is easy to replicate but there’s a fair amount more technical challenge to Sonny’s chorus solos.

Learn This Song: Keep It to Yourself | Sonny Boy Williamson | Blues Harmonica Lesson

Oh, sweet voodoo swamp master, it’s John Lee Hooker, the crawlin’ king snake himself. Right up the top where he belongs. An absolute legend of the blues, his sound wouldn’t be complete without the palpably moody harmonica riffs featured in many of his songs. Ironically, the original version of this tune has only a guitar but it’s so perfectly suited to the harmonica that it’s become a favorite among harpists of great flavor (well, us, anyway).

With little more than one simple riff repeated variatingly, the smooth blues badassery of “Boogie Chillun” is in reach of all healthy harmonicists. The lesson linked below features a tongue block exercise perfect for beginners. For peak performance, we recommend sneaking out at night to practice this little ditty on the dance floor of a blues club.

The harmonical explosion in Whammer Jammer is spitting pure fire. We wouldn’t have been surprised if smoke came pouring out of harp player Magic Dick’s “Lickin’ Stick” (as it was known) by the end of his performance. If you’ve just listened to the song, it should come as no surprise that in The J. Gelis Band’s 70’s hay day, Magic Dick was named as “the best white musician to ever play blues harmonica.”

By now, you’ve probably put two and two together to realize that this is not a song to be attempted by the faint of heart (or of not so Magic Dick). We would definitely recommend it to experienced players. However, if you’ve got the balls for it, this is one impressive tune to learn on harmonica.

You just cannot get more badass than The Doors. There’s a gritty authentic depth to this band that most other iconic rock n’ rollers simply cannot compete with. The Doors have got the kind of soul which no amount of autotune and cocaine pretense (we’re looking at you, Rolling Stones — although “Midnight Rambler” had some solid harp) can reproduce, and “Roadhouse Blues” is dripping with it. If you want to feel your mojo risin’ as you drink up your harp like a bottle of whiskey, then this is the song for you.

With 8 straightforward harmonica riffs, mastering this beast of a song is within plausible reach of even the greenest harmonica players. Whether or not you can pull it off comes down to whether or not you’ve got enough raw spiritual power for it. 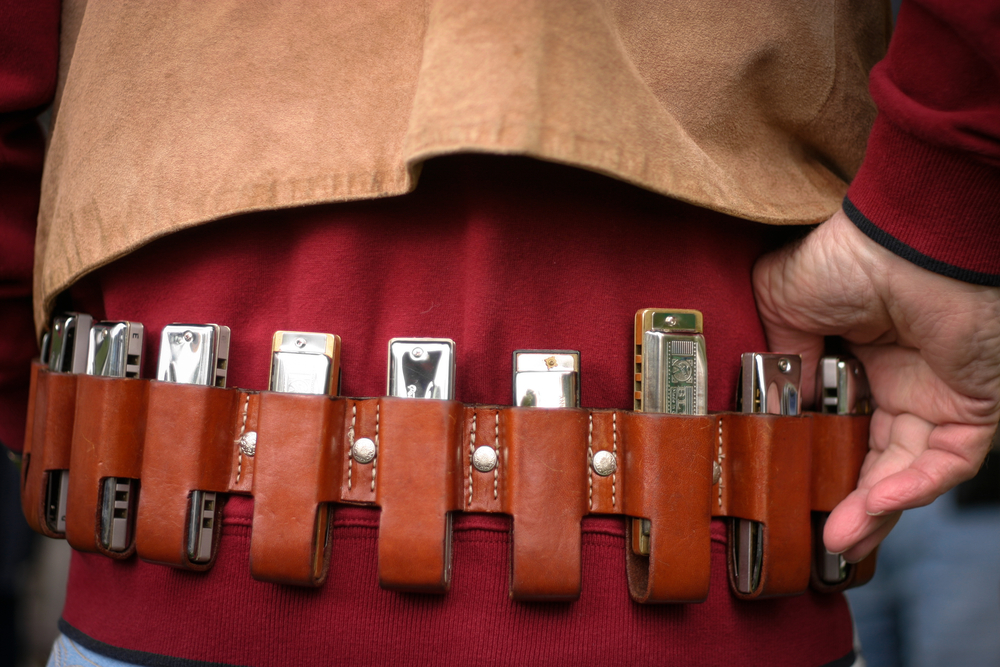 Bring It on Home

Time to round up our list of “12 Badass Songs To Learn On Harmonica.” We sincerely hope you’ve enjoyed the ride.

These were just a few of the many, many incredible harmonica-hearted tunes out there, and we encourage you to further explore the discography of all the bands listed above, where you will find some real gems.

Now, grab your harpoon and get sailin’!