Mustang vs. Camaro. Marvel vs. DC. Nintendo vs. Sega. Godzilla vs. Everything. There are rivalries in our world that span generations, transcend culture and location, and spark fierce debates wherever they are mentioned. If you play guitar, there’s one rivalry that dominates the history of the instrument: Gibson vs. Fender.

If you are a new player looking to start your journey or a seasoned veteran wondering if you should take a side in this battle, this article is for you. Inside, we are going to look at where this rivalry came from and weigh the merits of each. We’ll talk about the famous models, the artists who play them, and the influence that these two companies have had on the music world.

When you talk about industry giants, it helps to start at the beginning. The good news is that it’s not a boring story at all. In fact, if not for a man with a touch of arrogance, Gibson may never have gotten the chance to compete at all.

In 1894, a man named Orville Gibson began building and selling mandolins. In 1902, he formed a company and started re-imagining the guitar as the world knew it. The Electric Spanish guitar, the Harp Guitar, and the very first Archtop Guitars were all made in his original Kalamazoo factory.

Up until 1950, though, interest rested firmly in amplified acoustics and mandolins, and while Gibson was a respectable company, it wasn’t the giant it is today. Its biggest rival was Epiphone, and at the time, Epiphone was outselling its Michigan counterpart. Gibson now owns Epiphone, but that was almost a very, very different story.

Lester William Polsfuss is credited with inventing the electric guitar as we know it today. You can dive into the timeline of his life here; it’s absolutely worth a read if you even care a little about the history of electric guitars. We are going to focus on “The Log,” though, since that’s the precursor to the instrument we all know and love. It is literally a 4×4 post with a Gibson neck bolted to it, and it took Gibson 10 years to realize how genius that was. They almost never got the chance: Les Paul actually took his design to Epiphone first, but Epiphone laughed him out of the office.

Rob Scallon gives an excellent overview of the original Log; they even let him play it. The video is worth a watch; it really shows how far we’ve come, but at the same time, how little has changed since then as far as the electric guitar is concerned.

While Gibson was producing mandolins and banjos, Clarence Leonidas “Leo” Fender was selling radios in Southern California. Like Les Paul, Leo Fender was a tinkerer. He loved building things out of electronics, and in 1944 he teamed up with Clayton Kauffman and began designing and selling lap-steel amplified guitars. In 1950, they would build the precursor to the Telecaster, the Esquire, and change history.

The guitar was designed to be cheap and easy to make and was intended to be an instrument that anyone could afford and learn. In the beginning, though, people were not receptive to the idea of a solid body instrument, so Leo Fender tracked down a star player and innovator to endorse the new guitar: Les Paul.

There was a problem, though. Les didn’t like the Telecaster. Les Paul was a bit of an elitist; he decided that the Telecaster was too plain, too much of an “everyman’s” instrument. After being rejected 10 years before, Les Paul took his solid-body guitar idea to Gibson again. This time, though, he had some powerful ammunition.

Les would tell Gibson that if they didn’t make a solid-body guitar to compete with this new-fangled Fender Telecaster, Fender would put them out of business. Gibson agreed, and in 1952 the Gibson Les Paul would start to make its way into the hands of guitarists. If you ever wanted to point to the start of one of the world’s greatest rivalries, you’d point to this exact moment in time.

Currently, each manufacturer has hundreds of guitar lines that span every genre and configuration. The following list is by no means comprehensive. There are some truly great instruments that we don’t cover; the Firebird and Jaguar, for instance, deserve their own articles.

We just want to point out three instruments from each manufacturer that you are probably most familiar with and that really define their respective companies as a whole. These are the ones with the most interesting stories and the ones you are most likely to find in the hands of your favorite guitarist. 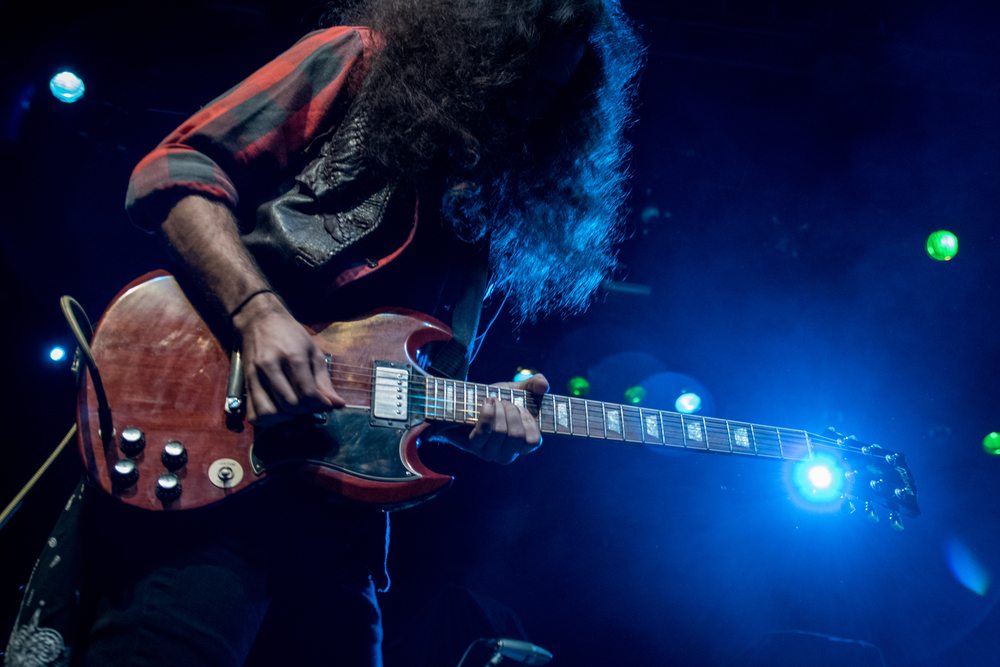 Gibson guitars tend to be more expensive than their Fender counterparts because of their construction. The glued-in neck, the angled headstock, and the tight tolerances all help give Gibson guitars their renowned sustain. This construction also adds to the manufacturing cost. By comparison, Fender guitars are cheaper, thanks to their simple neck styles and loose tolerances.

Gibson guitars usually use the 24.75in scale instead of Fender’s 25.5in and are usually found with humbuckers instead of single-coil pickups. Those pickups make the average Gibson louder, warmer, more bass-oriented, and can really maximize the sustain. Blues, heavy-rock, metal, and anywhere you hear chunky rhythm guitar work are the natural habitats of Gibson guitars. 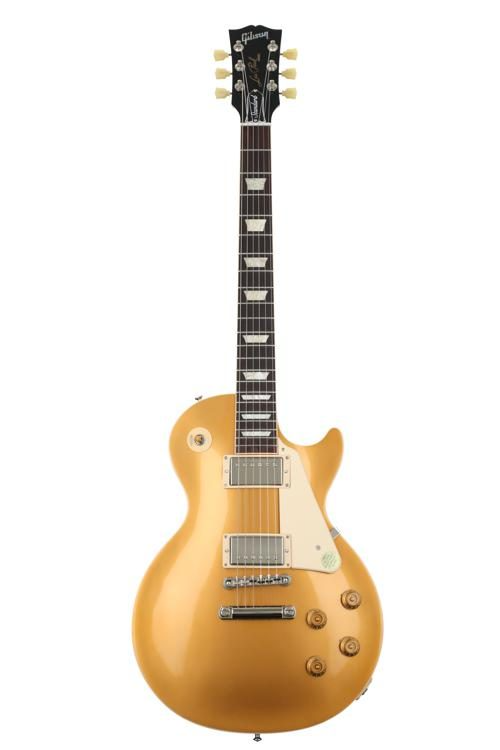 You can’t talk about Gibson without talking about the Les Paul. Named after the guy who is widely credited with creating the first solid-body electric guitar, the Gibson Les Paul is a heavy, fat-sounding guitar.

It was first introduced in 1952, but by the ‘60s, the line lagged in sales behind most competitors. Gibson reinvented it in ‘57 by replacing the P-90 pickups with the now world-famous PAF pickups as a standard option, but it wasn’t until the mid-‘60s that the Les Paul became a cultural icon. It was as if overnight everyone realized what a tone monster the instrument was, and by 1970 you couldn’t watch a music concert without seeing a Les Paul front and center. 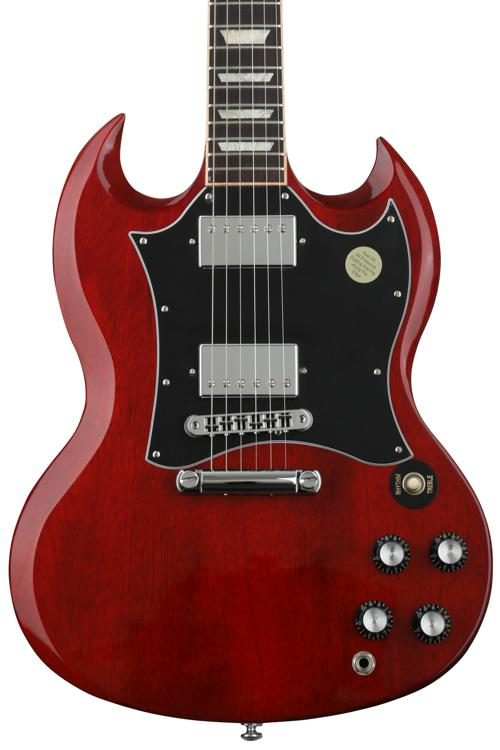 Gibson created the “Les Paul Solid Guitar” as a successor to their popular Les Paul line. It was thinner, lighter, hotter, and had a distinct double cut-away design that still stands out as a symbol of rock and roll to this very day. Les Paul didn’t like it, though, so they dropped the Les Paul part of the name and simply called the thing the SG.

The SG is the best-selling Gibson line of all time. The chances are good that even if you don’t know anything about electric guitars, you know what the SG looks and sounds like. 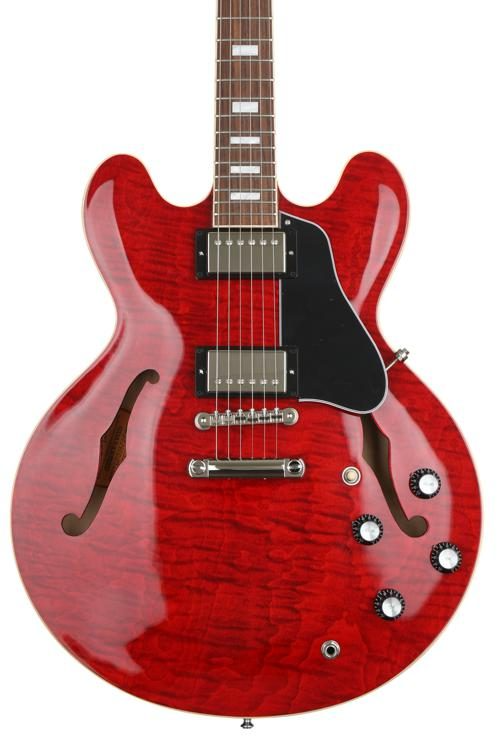 The Gibson ES-335 is a semi-hollow rock and blues icon that was first introduced in 1958. The ES stands for Electric Spanish, and prior to the 335, the ES line consisted of acoustic guitars with a pickup thrown on the face. No one had ever seen a semi-hollow guitar before the 335s introduction, and the combination of solid-wood tone and lightweight acoustic feel made it an instant classic. 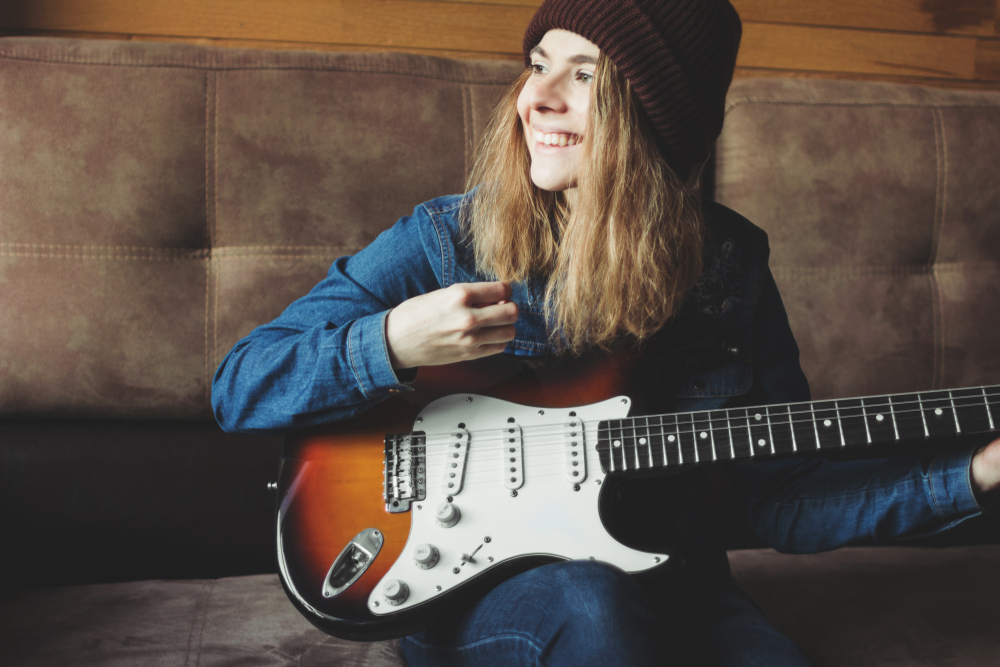 Leo Fender had 2 goals in mind when he began building guitars for the world: make them cheap and easy to work on. That mentality exists to this day. Fender guitars usually feature bolt-on necks that are easy to remove and work on and large cavities that can accommodate many different pickup configurations.

Many Fender models have tremolo bridges, and unlike Gibson electrics, most Fenders have brighter, lower-powered single-coil pickups instead of humbuckers.

The biggest common difference between the two manufacturers is the shape and length of the neck. Fenders use a 25.5in scale and a flat headstock. The longer scale means there’s more distance between frets, which tends to make Fender-style necks more popular with soloists. 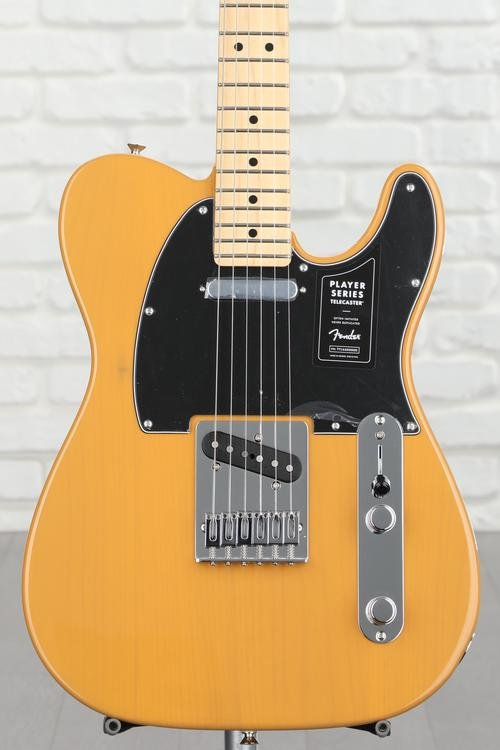 The Telecaster was technically Fender’s second guitar line, but it’s the first that was a huge commercial success. It is credited as being the instrument that brought the electric guitar to the public, and it remains one of the most popular guitar shapes in existence. The single-coil in the bridge gives it a bright, country/blues sound, and the original “lipstick” neck pickups are still considered some of the best pickups available for slide guitar. 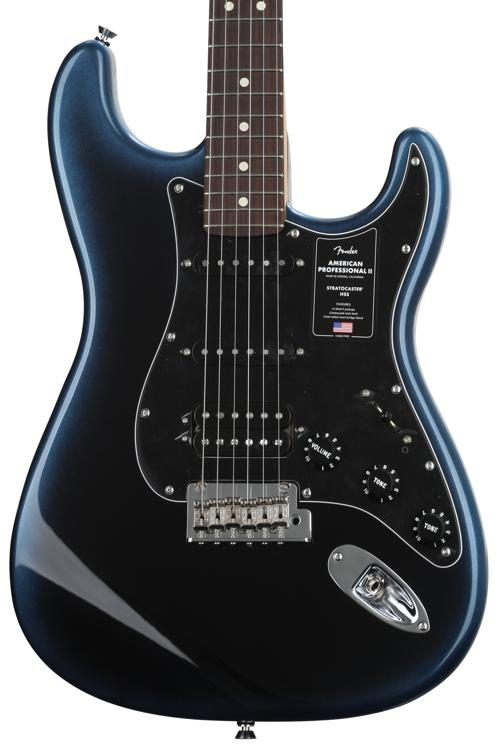 Stratocaster, named after perhaps the most famous instrument manufacturer of all time, Stratovarius, is perhaps the most versatile guitar in existence. These guitars are incredibly simple, and the bolt-on neck offers limitless customization. It’s rare to find a Strat that hasn’t been altered, and that customization was integral in creating the guitar Gods we all know and love. 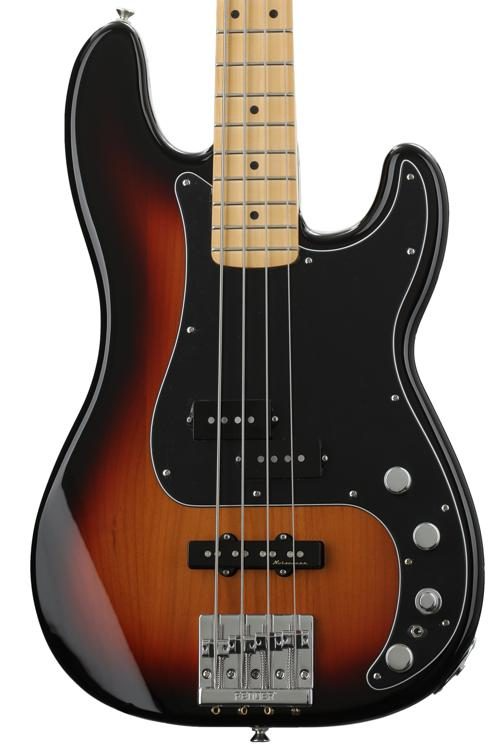 The Precision Bass, and its counterpart, the Jazz Bass, were some of the first electric bass guitars to ever see widespread use. Designed by Leo in 1950, the P-Bass is responsible for the electric bass sound that is still wildly popular for use in everything from pop to metal.

If you check any top guitarist lists, you’ll see two names appear more often than any other: Fender and Gibson. In fact, with the exception of the franken-Strat playing Eddie Van Halen, every musician on Rolling Stone Magazine’s top ten guitarists of all time use either Gibson or Fender instruments.

Here are ten famous guitarists and their equipment, in no particular order. You can click the highlighted names below to watch footage of these iconic artists play their Gibson or Fender guitars. 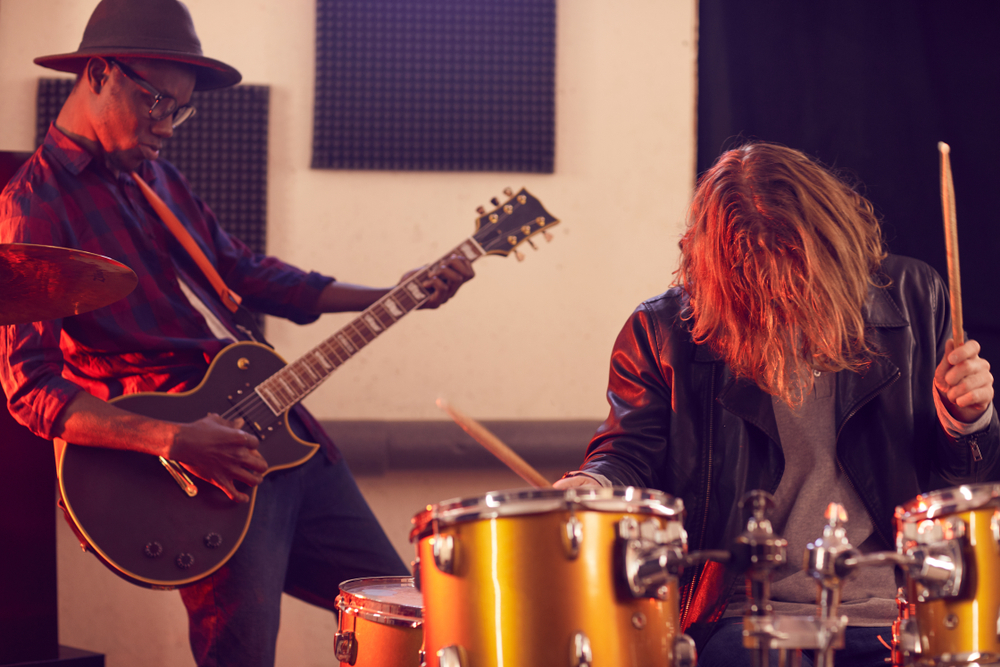 The “Fender vs. Gibson” debate extends far beyond the clash between the two companies. There are more instruments inspired by these iconic designs than there are actual product lines from the companies.

When Gibson became one of the largest guitar producers in the US, they bought their first rival and turned it into the nameplate of their budget series of guitars. Fender, wanting a budget line of their own, adopted the name of their first electric guitar design to transform into a beginner instrument line.

Both Epiphone and Squier are brilliant manufacturers in their own right. You can’t talk about beginner guitars without mentioning both, and for many people, they offer the look, feel, and sound of their Gibson and Fender counterparts without the steep price tag.

If there is one instrument design that has been copied more than any other, it’s the Stratocaster. Even Gibson tried their hand at it with the Epiphone S-Series. The Stratocaster design is so easy to reproduce that almost every manufacturer on earth has made a Strat, and many of them are just as good if not better than their Fender counterparts.

The “Super-Strat,” made famous by guitarists like Van Halen and Steve Vai, is simply a variation of the Fender Stratocaster design. These Strats are customized to have more fret access, be lighter, and often have specialty designed pickups to squeeze every ounce of playability out of the design. Companies like Ibanez, Schecter, Charvel/Jackson, and ESP are all famous for their amazing Super-Strat variations that can be traced back to Fender’s original design.

The Most Iconic Shapes

The “inspired by” designs don’t stop at the Stratocaster, though. Walk into any guitar shop, or look at any online catalog, and you’ll see hundreds of Les Paul-like shapes. You’ll see SGs in every configuration and Telecaster clones in every color and finish. Even if Gibson and Fender were to disappear today, their legacy would continue through the designs that are now inseparable from the electric guitar world.

Is there a winner? Yes. Like most great rivalries, the winner isn’t one side or the other; it’s the people who get swept up into the mythos. As Fender and Gibson continue to fight for supremacy to this day, the winner is you. Every guitarist that ever dared pick up an instrument and get lost in playing has ‘won,’ thanks to these titans clashing.

That might be a bad answer. The truth is, we don’t want there to be a winner. If someone wins, then it’s over. We want this battle to continue until the last string is plucked. It doesn’t matter if you just picked up a 2nd hand Squier or you are sitting down with an original ’57 Gibson; we are all part of this “war.” Let’s savor it.