The term semi-acoustic is applied to a very large range of guitars that have been incredibly popular in all music genres since they were first created in the early 1900s; however, they tend to dominate the jazz and blues world. Every major manufacturer has its own take on these iconic instruments, and their versatility in tone is unrivaled.

This article will first discuss the history of these guitars and what makes them semi-acoustic. We’ll follow up with some of the different styles of semi-acoustic guitars and talk about the artists who made them famous. Finally, we’ll tell you what to look for if you are in the market for one of these beautiful instruments.

In the late 1800s, as bands got bigger and venues crowded, the need to amplify the humble guitar grew. The very first amplified guitars were simply normal acoustic guitars with microphones in them.

Then, in 1936, Gibson released the first modern electric guitar. It was a Spanish style guitar, and it had a proper electric pickup for amplification. The ES-150, for Electric Spanish, was the very first semi-acoustic guitar. It gave birth to one of the most iconic guitar lines in existence, the Gibson ES series, and started the electric revolution.

What Separates a Semi-Acoustic From an Acoustic

By contrast, an acoustic guitar that is designed around the electric pickup is a semi-acoustic guitar. They are built to be played plugged in, and that’s the biggest distinction.

However, many modern guitars stretch those definitions. Guitars like the Fender Acoustasonic are almost entirely acoustic in construction, but it’s largely meant to be amplified. The Yamaha Silent Guitar, though, is a guitar that must be plugged in but is meant to be played like a traditional acoustic.

The converging ideas between acoustic-electric and semi-acoustic guitars have led to the term “hollow body” becoming the more standard way to define the traditional semi-acoustic style. It implies that the guitar is first and foremost an electric guitar. Still, the body is hollow, which separates it from the prolific solid-body electric.

There are two main categories within the semi-acoustic guitar world and a handful of smaller categories. In general, the guitars in these categories are lightweight, warm sounding, and bigger than their solid body counterparts.

The first semi-acoustic guitars were constructed in an almost identical way to their acoustic precursors. They simply had a pickup on the soundboard instead of a hole. Today we would refer to this as a fully hollow body guitar. If you break one open, there is nothing but air and some bracing; there won’t be any solid chunks of construction.

Fully hollow body guitars are louder than other electric guitars when they are unplugged, and they are often much warmer in tone. The extra reverberation lends itself well to jazz, which is why you will sometimes see hollow-body guitars referred to as “jazz guitars.”

There are two primary ways that a fully hollow guitar can be constructed. A thicker guitar like the Gibson ES-175 is one of the largest electric guitar styles on the market. They are very similarly proportioned to concert acoustic guitars and have a lot of volume unplugged.

Thin-bodied guitars, like the Epiphone Casino, tend to be only a bit thicker than solid body guitars. They lack the sustain that a solid guitar has and lack the volume of thicker hollow bodies. However, the jazzy tone and very comfortable weight have made them a favorite of live performers. 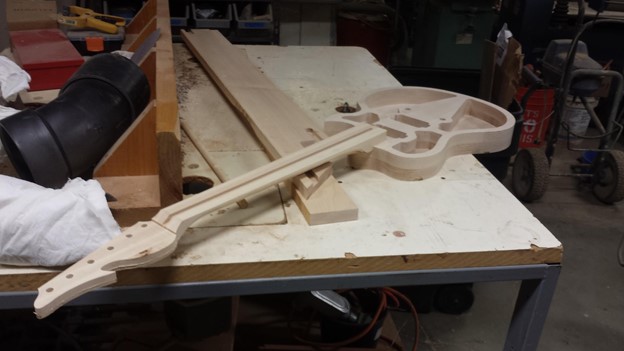 Semi-hollow guitars have a solid core that the pickups and bridge mount to. However, they feature hollow chambers. Some guitars, like the Rickenbacker 360, look like fully hollow body guitars. They have f-holes or other details that allow you to look into the chambers, and they feature the response of a hollow guitar with the sustain of a solid body.

Other styles of semi-hollow guitars are simply solid-body guitars that have chambers routed into them and usually feature a solid top like this Chambered ESP Eclipse. This is mostly to reduce the weight of the guitar and alters the sound very little. In fact, retailers often group these routed guitars into the same category as solid-body instruments.

As mentioned above, there are a lot of guitars that blur the line between acoustic-electric and hollow body. Some of them are as follows; however, the rate of innovation is high, and this is by no means a complete list.

Sometimes the best way to understand a category of a guitar is to listen to them. Semi-acoustic guitars are often found in jazz and blues, but they are also found throughout rock and roll. This is especially true for early rock and roll since the solid-body guitar hadn’t reached widespread popularity yet.

The following guitarists are well known for playing hollow-body guitars. Click on their names to hear and see them in action.

Chuck Berry is one of the most famous guitarists of all time and was responsible for ushering in the age of rock and roll. His guitar, Maybellene, is a Gibson ES-350, a hollow body guitar first developed in 1948.

Maybellene was featured on several album covers, but it is difficult to find video recordings of him playing the guitar because of the age. In 1963 he switched to the semi-hollow Gibson ES-335 after Gibson discontinued his signature 350t line.

Chester Burton, aka Mr. Guitar, is one of the original guitar virtuosos and one of the most innovative players to pick up the instrument. He created the “Nashville Sound” and made the country genre what it is today. Even when he wasn’t playing his Gretsch 6120, he made the music world a better place by acting as Dolly Parton’s producer.

George began his career at the age of 19 with his combination of jazz, pop, R&B, and occasional scat singing. That was in the early 1960s, and he’s still going strong today as a featured guitarist for groups like the Gorillaz, with his Ibanez LGB30.

At some point, every guitarist goes through a jazz phase. They try to learn the funky suspended chords and complicated free time rhythms that color the nightclubs and parlors dotting smoke lined streets. Those players that they are trying to emulate, though, are themselves just trying to emulate Wes Montgomery and his Gibson L-5.

The following guitarists are well known for their time spent with semi-hollow instruments. As a side note, Chuck Berry belongs on this list as well because of his time with the ES-335. Since he named his hollow 350, though, we thought it appropriate to give him the spot on the list above.

3 of the 4 Beatles owned and recorded with Epiphone Casinos. Paul McCartney used it on Ticket to Ride, and George Harrison used a modified Casino to record Penny Lane. John Lennon would record the White Album with one, and many of their world tours prominently featured the semi-hollow guitar.

It’s impossible to mention the blues without mentioning B. B. King and Lucille, his modified Gibson ES-355. Riley “B” B. King was a blues guitarist that basically defined the blues guitar genre, and he will forever be remembered as one of the greatest musicians to ever pluck the strings.

Brian May, the guitarist for Queen, calls his guitar “The Red Special.” He built the guitar himself from reclaimed wood, and it features a variety of unusual properties, including a 24” scale, oak fretboard, and semi-hollow construction. If you want one, May has officially licensed BrianMayGuitars to sell replicas.

Dave Grohl is probably best known for being someone that no music lover can hate. The former drummer for Nirvana and frontman for The Foo Fighters have been rocking the world since he first started touring at age 17 and can still be found playing to sold-out concerts with his signature DG-335, a modified “Dave Grohl” ES-335.

If you are in the market for a new semi-acoustic guitar, there are a few things to keep in mind.

Allow Yourself to Be Inspired

The best advice we can give you, and it extends to buying every guitar, is to buy the guitar that you want to pick up and play. If you watched Dave Grohl play and then had dreams about performing The Pretender live, get an ES-335. Having something that inspires you will help keep you motivated to practice, and it will bring you a lot more joy than something that critics may say is a better guitar.

The biggest differences between styles of semi-acoustic guitar are mostly size- and weight-related. Imagine holding the guitar for long periods. Are you going to be comfortable working around the fairly large body of a fully hollow body, or would you rather have the smaller, lighter semi-hollow?

Don’t Be Afraid of Budget Models

Guitar manufacturing techniques have come a long way since the ‘50s. Today’s budget models are often fantastic alternatives to the steep price demanded by the bigger guitar brands. Epiphone, ESP, Squire, and Ibanez all offer phenomenal hollow and semi-hollow guitars that won’t break the bank.

The only time to fear a budget guitar is if the price is too good to be true—because it probably is. The hundreds of brandless knock-offs and imports should probably be avoided unless you are very comfortable working on guitars. We’re not saying these guitars won’t work, but their quality varies wildly, and they often come from the factory in need of setting up, just to make them playable.

The easiest way to get a feel for the options available to you is by browsing through some of the most notable models. To make it easy, we have arranged them into four categories.

Fully hollow guitars tend to be on the expensive side, and they are somewhat rare on the modern music scene. However, older, established brands like Ibanez, Gretsch, and Godin all have beautiful examples. If you want something on the smaller side, PRS has a fully hollow guitar that is very thin and manageable.

Compared to the hollow body world, there is an infinite number of semi-hollow guitars on the market. Gibson largely dominates this space because of how prolific the ES-335 is, but almost every major brand has its own take on the semi-hollow.

The following budget guitars are the perfect way to get into the semi-acoustic world. You might want to upgrade the pickups down the road, but the playability is excellent.

Nothing quite captures emotion like the guitar, and the most emotional guitarists all seem to gravitate towards the semi-acoustic. If that describes you, grab one and enjoy the warmth. The lack of weight will have you playing for hours, and you’ll love the variety of tones you can get out of these great instruments.